Our “EPIC 1” sojourn of November 2020 was going to be hard to beat, but taking the long route home from Papua to Komodo, “EPIC 2” held a lot of promise. Doing their homework first, Mark and Jos checked old notes and asked around a bit. Counting on Ricardo Ondina’s extensive experience exploring eastern Indonesia, his review “good to the west” about a seamount in the Tayandu Island group was enough reason to go and have a look. Google satellite and the Indonesian sea charts showed extensive reef flats, white sandy beaches and some interesting sea mounts, all part of this group of remote islands in the Moluccas. We were not disappointed! 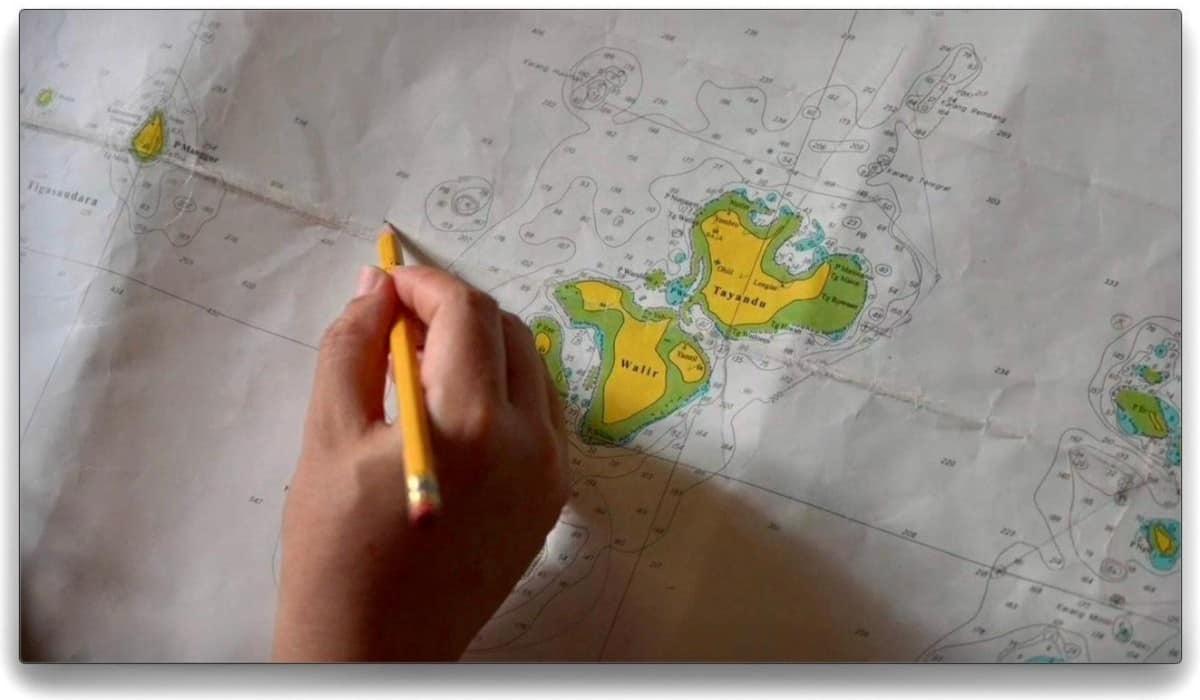 A small group of marine conservation and tourism professionals would gather and board the Seven Seas in Sorong for a month of adventure. Flying from Bali via Jakarta to Sorong, we checked the news and saw that a storm was developing in the area where we were going. It moved south-west, caused havoc for people in Kupang and Adonara, but we were lucky with flat seas and dramatic sunsets each evening while still up North. Island hopping from Misool to Pisang and down the Bird’s Head of West Papua to Momon, we visited stunning beaches and had some amazing dives. We swam with oceanic mantas and got drenched under the Momon waterfall, dumping massive volumes of the clearest freshwater on us, straight from the pristine forest that rises up here from the coast. Next, we visited the whale sharks in Namatota, were swept along with a high-speed current over the most amazing soft coral ridge at Pintu Arus in Triton Bay. For a grand finale at the Papua mainland, we had a fantastic dive at Dramai, with incredible fish around dramatic rock formations. In the course of only 5 days, I felt I’d been holidaying for a month already. 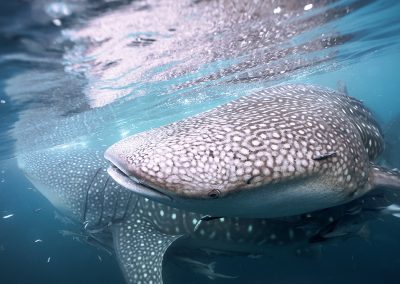 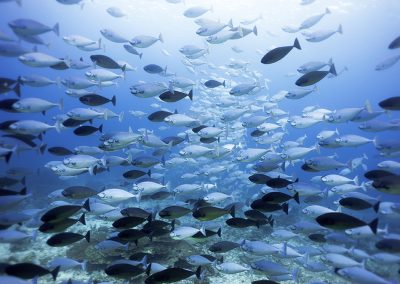 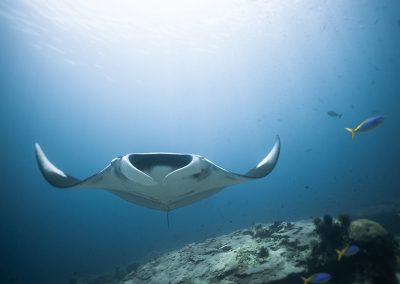 After paying various fees to government and villages to be around some of the bays and reefs in west papua, however, some anxiety had been building as we got closer to the Tayandu island group. The Seven Seas crew had heard stories about crew of other liveaboard vessels ‘taken hostage’ over misunderstandings related to reporting procedures here (or there) and over uncertainty about what was expected to be paid to anchor, snorkel, or dive. Arriving early in the morning, Captain Rivai gave the green light to lower the tenders and Helmy, one of our fellow adventurers, fisheries research assistant for People and Nature Consulting, and born in the Moluccas, joined the crew to report on land. We should not have been worried. Welcoming us with enthusiasm, the head of one of the villages said that the community ensures to keep the reefs free from bombing, and while not many liveaboard vessels visit the area, he thought that we might enjoy the diving. 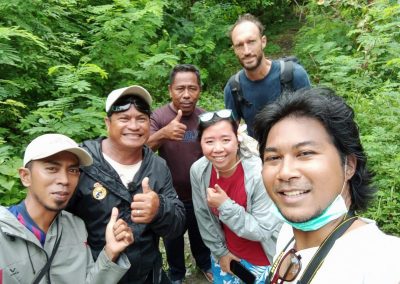 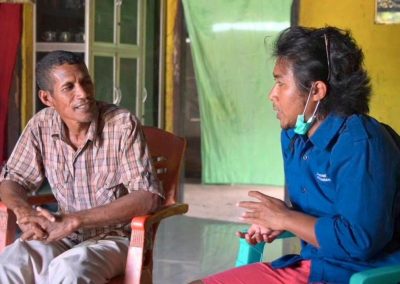 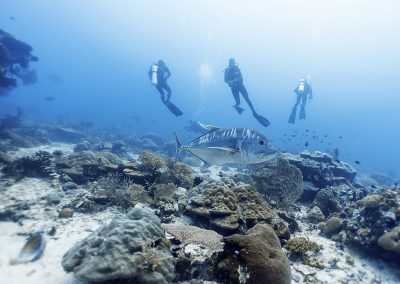 And how true was that! Dropping in at the first site, we had to swim a bit to get our orientation on this enormous submerged reef, but the fish biomass was building up dramatically, the closer we came to the edge of the reef. During all of our dives around the area, we swam with a great variety of mature-sized groupers (one huge 25 kg male Plectropomus Laevis followed Jos and me around like a puppy!), swarming schools of my favourite unicorns – Naso unicornis – and more Napoleon wrasses (Cheilinus Undulatus) than I could count. We explored huge fields of all types of hard corals, found a massive nurse shark when peeking under one of the massive coral bommies that must have been growing to meet the sun rays for hundreds of years, and felt so inspired by the feeling that really healthy reef systems still exist in Indonesia. While Ricardo’s review was definitely valid, we found many more dive sites, great variety in underwater scenery, all making it very much worth to come all the way, to be surprised at Tayandu. 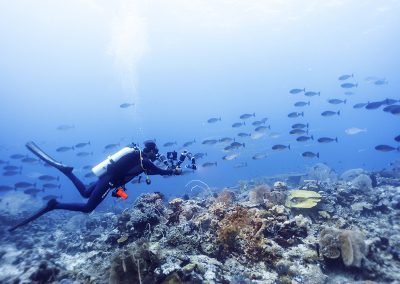 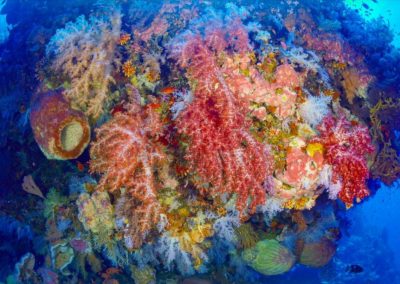 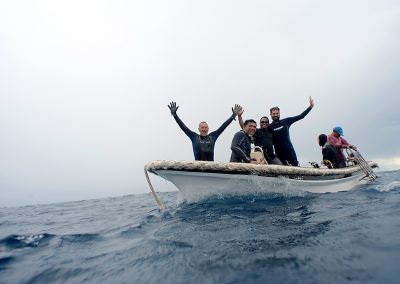 Intrigued to learn more, Hilda, our fellow adventurer and Oceans program manager working for Yayasan Konservasi Alam Nusantara and Helmy, visited some more villages and a pearl farm nicely nestled in a channel between some of the islands, lined with stunning white sandy beaches and calm and clear blue water. Again, the villagers were super friendly and interested to hear our views on the area. As Alex wanted to get some more drone shots before the Seven Seas had to move on towards Manuk, we prepared for one more dive and snorkel at a rock in the middle of the channel near the pearl farm. Even more surprises awaited us there. Even though the top of the rock was covered in rubble, the edges were very interesting indeed. Each of us saw fish that were known from the identification books in the Seven Seas library, but that were different from those we had seen on the reefs before. Jos showed me an uncommon and cryptic species of the Latidae family, Psammoperca waigiensis or the Waigieu Sea Perch, a rare find on a dive at a shallow reef. Looks a bit like a small Nile Perch, or a Barramundi, but this one lives on the reefs instead of in fresh and estuarine waters. Next, floating quietly at 5 m for my safety stop, I saw 2 types of parrot fish that I never saw before, one with unreal golden colours. Speeding straight to the sand spit after the dive, the others also shared how they noted several special species of fish here, so different from what they commonly see.

Sitting for sometime on a most beautiful version of the #gameofthrones#, I started to get the feeling that EPIC2 was well underway to be even more remarkable than EPIC1! 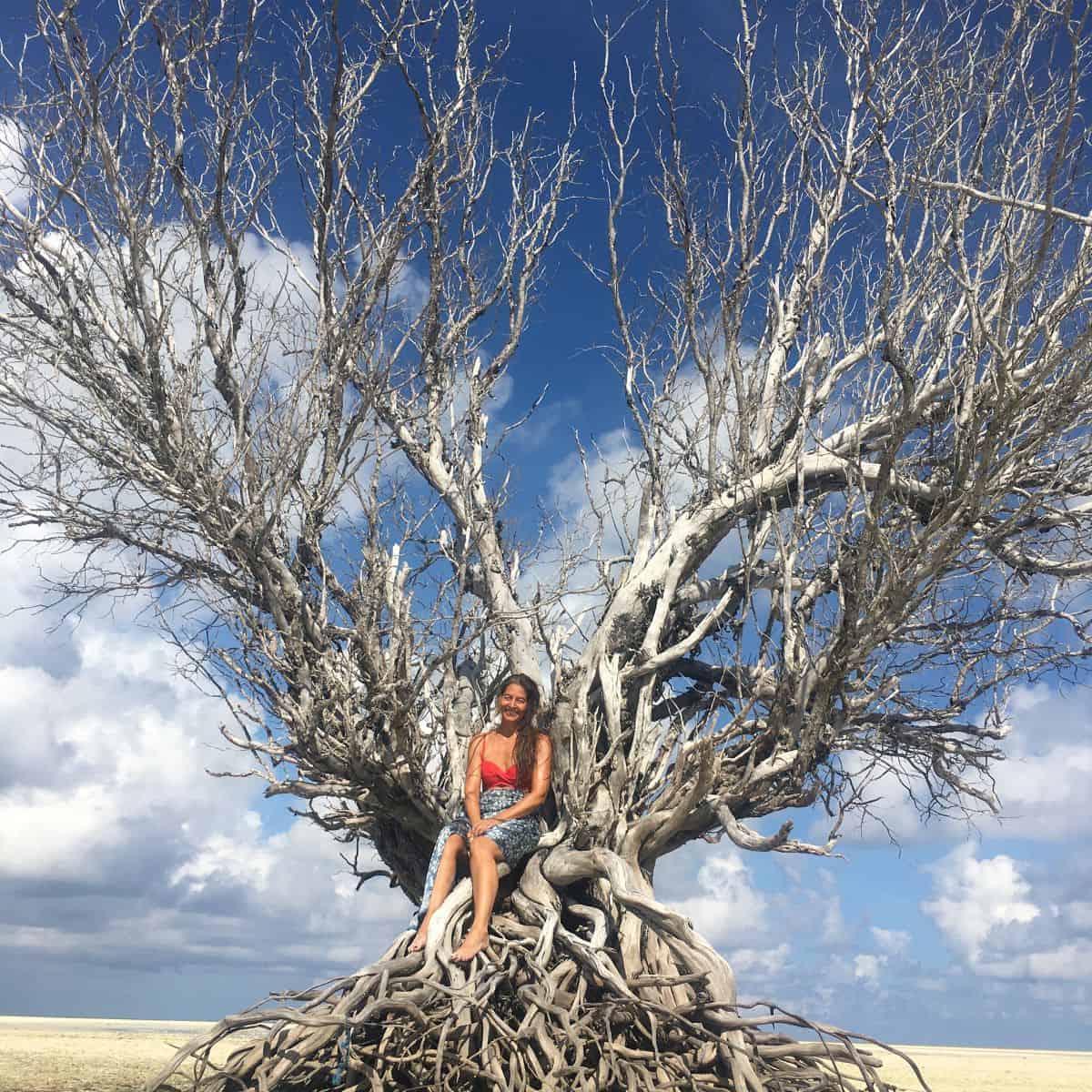 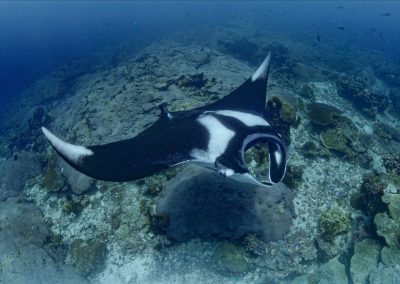 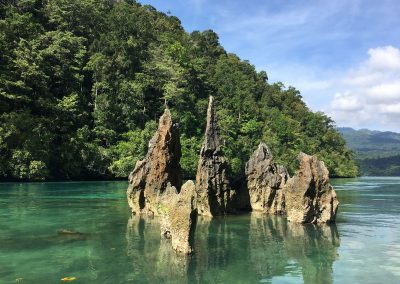 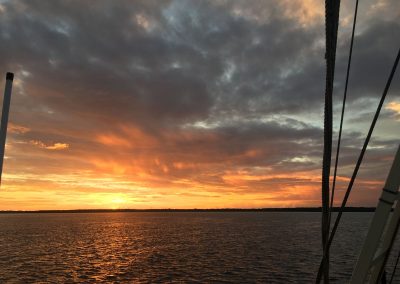 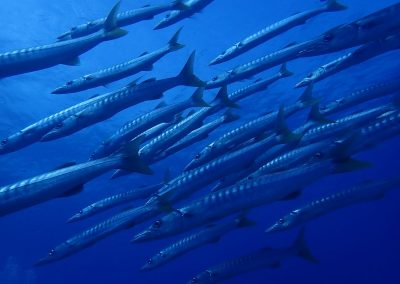 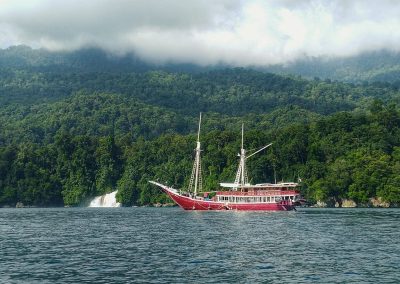 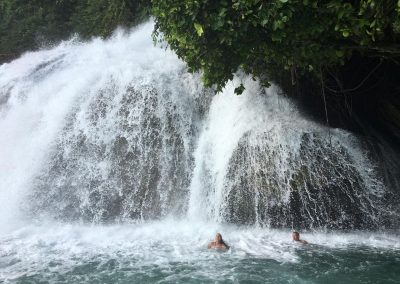