One never knows what chance sightings will arise on any given snorkel or dive so it’s a treasure hunt every time you jump in the water. A particularly memorable sighting is now emblazoned on my brain from a snorkel in August over “The Crack”. This dive site was given the name because of an earthquake in 1992 that caused large fissures in the fringing coral rock around Pulau Babi. The resulting tsunami leveled the village on the island.

We snorkelers jumped into the water at the same place a boatload of divers went in. The wall there enabled divers to see lots of critters as well as explore the cracks. After we jumped in, the other snorkelers Ann and steersman Big John, swam one way while I turned and headed toward the island. 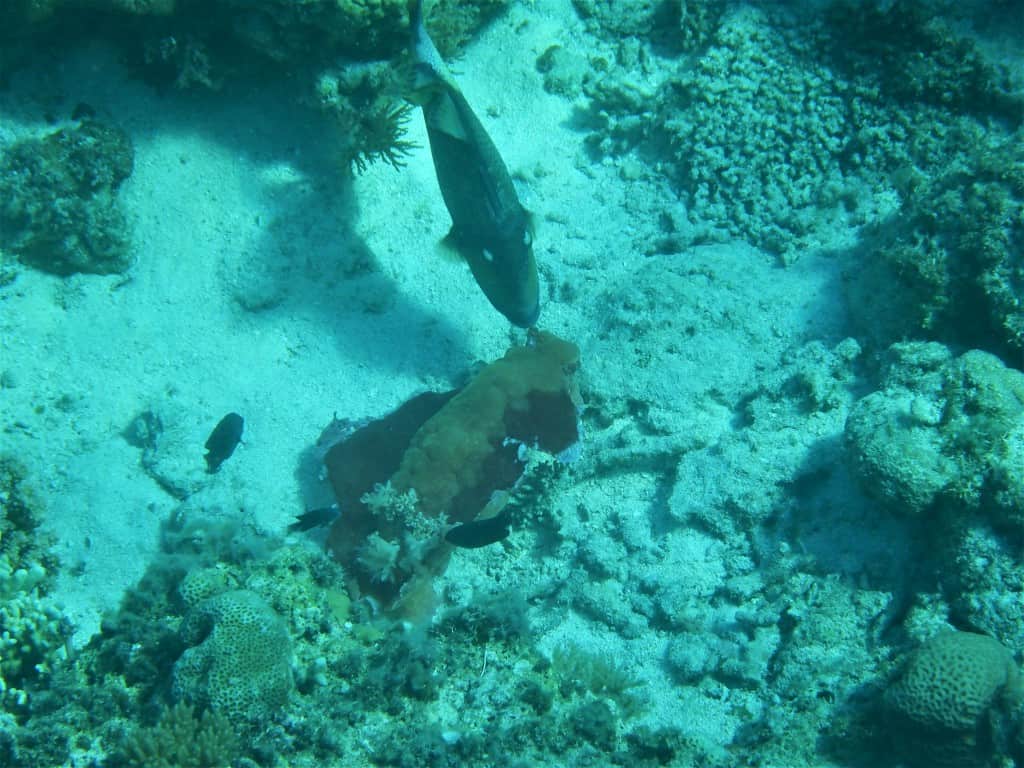 Almost immediately I noticed a large pink object. At first it looked like it could be a piece of garbage but I quickly realized it wasn’t. I was thrilled to think I might be looking at my very first Spanish Dancer! Gazing at this beautiful nudibranch, which was about 14” long x 6-8” wide, swirling and undulating close to the reef, I noticed a Titan Triggerfish lurking nearby. With the white nictitating membranes covering its eyes, making it look particularly evil, it moved in towards the nudi, grabbed the “skirt” with its jaws and gave it a hard shake before taking a bite out of it. I called Ann and Big John over, (John confirmed it was a Spanish Dancer) and we continued to watch the fish viciously attacking the nudi with repeated violent shakes and bites to the “skirt” and gills. I believe that the fish had already started dining on the nudi when I jumped in the water and startled it away.

I quickly realized that my first sighting of a Spanish Dancer was an unhappy one because this beautiful animal was caught in its mortal throes.

We stayed and watched for probably 20 minutes, groaning in our snorkels every time the Titan Triggerfish attacked this lovely creature. The fish would swim away if I got too close to it on the surface, but this novice underwater camera user did get some decent video footage of the attacks, though in black and white because of the distance. Because I couldn’t see well through the camera, I repeatedly put it aside so I could watch this incredible spectacle unimpeded. Big John got some good stills of the brilliantly colored nudibranch by free diving closer. Eventually, of course, we noticed that the Spanish Dancer wasn’t undulating much anymore.

Evidently it isn’t common to see a Spanish Dancer out in the open, even though I had seen many of its beautiful pink rosette egg cases over seven trips on the Seven Seas. I knew they could get quite large. To see this exquisite creature being attacked and eaten by the triggerfish got the adrenaline pumping with the life and death battle happening before my very eyes.

Phew…I think about that experience often and it still mesmerizes me by the combination of beauty, aggression, life and death. An extraordinary experience that few people get to see.