On the Way to Lucipara

Waiting for the results of the rapid tests in Ambon, I glance through the amazing pictures by Tommy Schultz, made when we both visited the Lucipara and Penyu islands in November 2019. The whole world has changed since, and I feel even more privileged to be able to go out there and see whether the reefs are still as beautiful as then, if turtles are as abundant and also nesting now in April, and whether the brazen juvenile grey reef sharks who almost chased me out the water have grown up.

The Lucipara and Penyu islands are located 200 km south of Ambon in the middle of the Banda Sea. Kepulauan Lucipara is also known as Lousapara Islands, Lucapin Islands, Lucipara Eilanden, Lusipari Islands, and Pulau-pulau Lucipara. The islands can only be reached by boat during a few months each year during the change of the monsoon. It will take us approximately 15 hours to get there.

Famous for its resident seaturtles, the island group has been identified by the local government to become a marine protected area, but there are not many descriptions of the current status. In 2019, a small group of adventurers, boarded the MV Oceanic to have a look. A marine scientist from the University in Ambon, our friend and manager of Tubbataha National Park that encloses a very special and remote group of islands in the Philippines, a few afficionados of underwater Indonesia, Mark Heighes – who explored the islands a few decades ago, Oceanic’s Ricardo and yours truly.

No one lives on the islands now, but there are some families who stake a traditional claim, used to live at the island called Mai and return to harvest the coconuts sometimes. We met a few fishers who had come all the way from Ambon to catch tuna and a few others who had come from Wakatobi fishing for reef fish off the steep drop-offs and around the lagoon of Skaro Reef. On one of the last days, we met with three government officials who are responsible to keep the new lighthouse running. Living on the island for three months at the time, two of them were keen to join us for dinner onboard and swap stories. 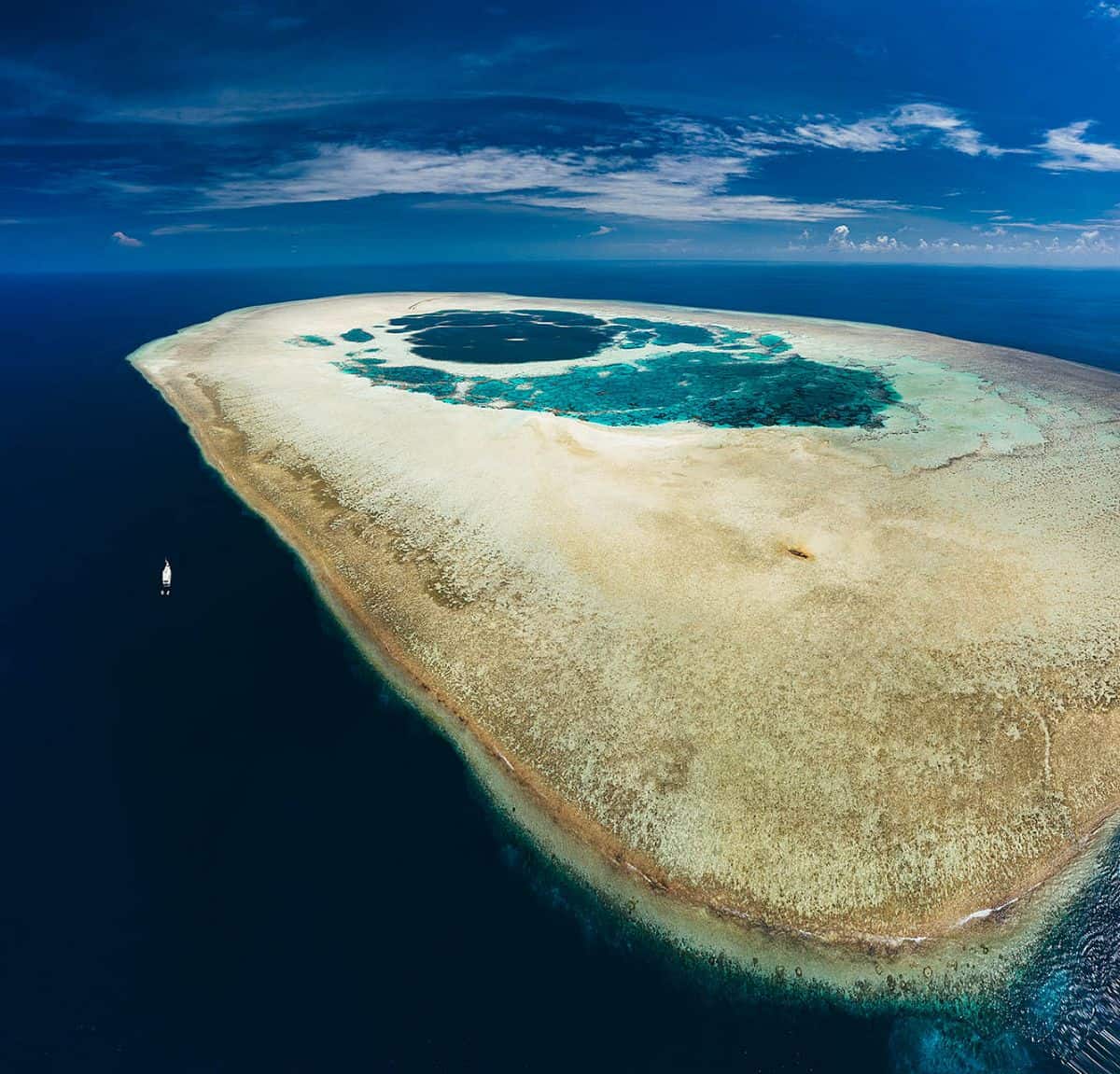 While the others were diving the steep drop-offs, I decided to snorkel the reef flat and explore the shallows. The water on the extensive flats warms each day and when the tide goes out, engulfed me as if I was in a warm bath. The corals have developed to such a range in temperature and seemed to thrive on the reef crest and down the walls as I did not see any signs of coral bleaching.

The snorkelling was brilliant as I could cover long stretches of reef to see bigeye trevallies, schools of large unicorn fish, barracuda’s, rainbow runners, smaller groups of blue fin trevallies, many longnose emperors, and a few very significant sized herds of bumphead parrot fish. I was looking out for some indication of the level of fishing. Usually, absence of sharks, groupers and the larger sizes of fish indicates high fishing pressure. Special marine wildlife such as rays, octopus, and lobsters can also provide some idea of the status of the reef system.

It was great to see sharks on almost all my snorkel trips. Black tip reef sharks love the shallows and at some reefs one or two followed me, at some distance, during my entire swim. The few white sharks that I saw were just coming up from the deep to have a peek at me swirling around the reef crest. What I had never seen before, however, were the small groups of juvenile grey reef sharks who were so curious that they would swim along with me on many of the snorkels. During one snorkel I even had to chase off a group of 13 of them as they were a bit too bold for my taste. 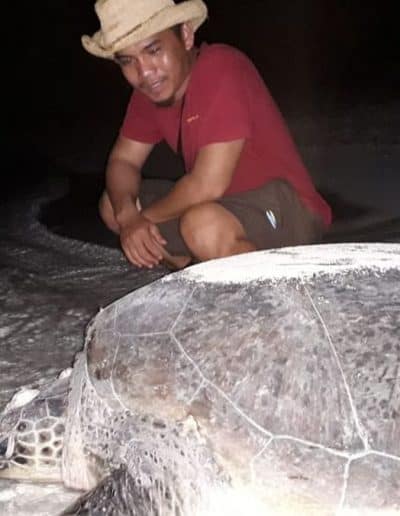 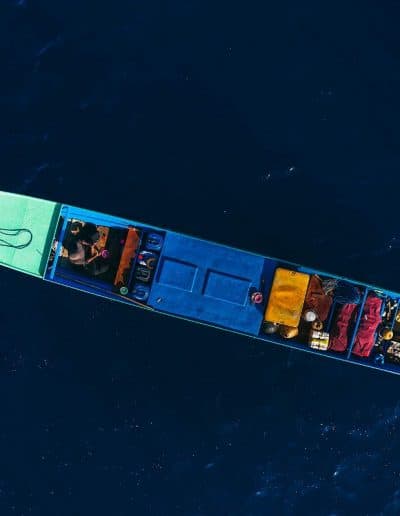 But the best was clearly all my sightings of sea turtles. During my 14 snorkel sessions around all the islands, I counted a total of 470 green and hawksbill turtles! More than 80% where green turtles and at high tide we visited the white sandy beaches to find countless green turtle nesting tracks. We sat quietly for hours on one of the beaches to witness a large green work for more than 1.5 hrs to lay her clutch of eggs above the high-water mark in between the scrub of the coconut trees. Unsuccessful she returned to sea, exhausted from the effort to dig a nest between the roots and leaves of the coconut trees. She would have to try again the next night. Hopefully she would find a better spot, as even though the islands are far from inhabited islands, we saw substantial amounts of trash and many of the suspected turtle nesting locations were filled with it.

I can’t wait to get back in the water and check out some of the nesting beaches again. It would be so great if amidst all the worlds uncertainty, the turtles at Lucipara islands would go about their life’s as if nothing changed.