By Lawrence Blair, with Photographs by Benjamin Kahn

This was an excellent 'extreme stress test' for the operational abilities of the Seven Seas, her crew and her remarkably even-keeled Captain Mark Heighes, while filming the first of a 3-part TV series on "The Coral Triangle". From Maumere in Eastern Flores and back again, via Komba, Adonara, Lembata, Pantar, Alor, Wetar and Solor, with malingering full-moon current-torn straits in between. It was virtually 24/7 for 2 weeks, laden to the gills with filming and deep diving equipment, plus cinematographers, directors, presenters, ichthyologists, reef and cetacean experts, volcanologists and cultural anthropologists - all shouting loudly and pointing in different directions.

There weren't enough bunks aboard to accommodate all of us, so various bodies slept scattered about topside, and the dining saloon was so stuffed with gear that we had to disperse with our plates throughout the vessel to eat off our knees. Yet we all got on wonderfully well, and returned with spectacular footage of crocodiles in Wetar, Sperm whales (underwater) in the Savu Sea, undescribed species of fish from over 100 meters deep, and the erupting Komba volcano, whose glowing missiles narrowly missed our rubber ducky. Komba pretended to be rhythmically erupting at precise 23 minute intervals, but changed its mind as soon as we parked beneath it. We also captured great footage and interviews with the itinerant Bajo Laut tribe, kite fishermen, seaweed cultivators, giant fish-trap weavers, ikat ladies, 'crocodile clansmen' of Wetar, and more.

Sperm whale diving into the abyss

In addition to captain Mark, thankfully assisted by his experienced first mate Karl Klingeler, we were accompanied by his famously aquatic aunty, Valerie Taylor - an inexhaustible font of terrifying stories - as well as his brother Jono, as tenacious an adventure cameraman as one could hope to find. Whenever they could 'steal' a speedboat, Benjamin Kahn, the world's expert on Indonesian cetaceans, would charge off with Jono for five hours at a time, tracking, identifying and attempting to film whales. Benjamin located at least six species of whales, and managed a poignant shot of Jono, or rather of his snorkel, bobbing amidst some nine surrounding Sperm Whales which had finally got used to them.

Particularly mesmerizing was the work of the famous, 3-man team of ichthyological boffins from the Bishops Museum in Hawaii: Drs. Richard Pyle, John Earle and Robert Whitton, who specialize in clocking new fish species, while diving with high tech helium mixed gas equipment down to as deep as 150 meters. It takes them an hour and a half to prepare their dives and up to three hours of decompressing on their way up again. They are constantly joking and nattering to each other in Latin and Greek, and with their large masks and helium mix, they continue doing this far below the surface, sounding like benthic Donald Ducks. They even tried to fool Benjamin Kahn, with his acoustical devices on the surface, by uttering approximations of the whale songs attempted by Dory in Finding Nemo, but without success!

Dropping down where no diver has gone before

They presented a singular challenge to Mark's skills at judging tides and currents, for these guys were nowhere near the surface. In the evenings we would watch over their shoulders as their three computers played back their deepwater footage of seascapes and fish species never previously seen by human eyes...

No less busy were our surface chief camera man and his sound recorder, Paul Costello and Robert McCrory, and our additional underwater shooter, the skillful and monastically patient Roger Munns, of Scuba Zoo Malaysia, who virtually had to be brought his 3 meals a day underwater. There was even talk of bringing his sleeping bag down to him too.

Perhaps the busiest of all were our distinctly pressurized, but good natured director, Richard Dennison, and his lady Susan Cosser (assistant director) as were 'data wrangling' duo of Sally Moran and Ven, tasked with logging and even rough assembling the torrent of incoming material which kept them, surrounded by hard drives, effectively glued to their computer monitors for the entire 2 weeks, where they must have seen more of the broader madness than any of the rest of us. 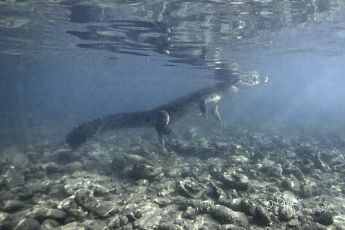 This was a wonderful and productive voyage, which took us first from Maumere's Bay, famously credited with some 3 times more reef fish species than in all the tropical Atlantic, including the Caribbean. Then on to spend several days amongst the small islands in the Pantar Straits - extremely fruitful for reefs, whales and peoples - and thence to Wetar, just north of Timor, which we confirmed is teaming with salty crocodiles. Many are tolerated living within a hundred meters of the villages, which apparently gives them a better chance of supplementing their usual diet of sea turtles with the occasional dog, pig or - yes, Wetarese!

If we'd spread the adventures of these two weeks over ten normal charter cruises, the clients would have been more than satisfied. It was a powerful reminder that despite the grim tales of pollution, overfishing and encroaching civilization, these waters are still very much alive with astounding wonders.

Lawrence Blair,
East of Flores,
May 2012


Testimonials from Science and Film Teams

Richard Lawrence Pyle: Wow! What a magnificent ship, magnificent crew, and what magnificent diving! Who could ask for anything more? The trip was fantastic in every way. Delicious meals, wonderful service, and spectacular dive sites, I can't begin to thank you all for supporting all of our crazy needs. Our dive operations were safe effective and easy because of the ship and the crew. I don't know how you managed to juggle all the different production teams with all their different needs, but I can say with certainty that all of our needs were not only met but exceeded. I'm very much looking forward to the next opportunity to sail and dive the Seven Seas!

Robert Kennedy Whitten: Aloha Sevenseas! Mahalo for all you do - the whole team was superb at anticipating all our crazy needs. Special thanks to everyone which helped with our huge re-breathers, cameras and cylinders. You all made this shoot happen. Great to see you again, Mark, after so many years. Looking forward to crossing paths again soon!

John Lawrence Earl: Aloha, I am in total agreement with the sentiments expressed by the other 2 members of the Bishop three. Thanks, or as we say "Makalo nai loa" for your support in our deep diving mission. Hope our paths will cross again!

Roger John Munns: I'd heard great things about the Sevenseas boat and the experience onboard matched and exceeded my expectations. Experienced and hard working crew, friendly, great food and good times. Hope to be back to cross the Wallace line with you again!

Benjamin Kahn: Excellent trip as the Seven Seas morphs effortlessly into a buzzing and thriving research base at sea. Well done to all crew! And plenty of whales to spice it all up, included Sperm whales, large "breeding bulls" up to 16-17 meters long, Blue whales including one looping in a ripping channel current, Bryde's in Wetar (a whole new area for whale surveys), Pilot whales, Spinners, Spotted, Fraser's, Pygmy Killers and the list goes on! Thanks so much and hope to be back soon. Special thanks to the speedboat crew during the long sunny sea days! 475 nautical miles surveyed all up during whale time!

There are now well over 700 testimonials posted at our website. Click here to have a look at some (or all) of them.

Next: Cruising The Seven Seas with Kids >