On a nautical chart, one might easily overlook the small islands of the Banda Sea. They are, however, oases of reef biodiversity, and most of these reefs are still in very good condition. The main threat to these reefs is over-fishing, either by fishers from nearby villages or by fishers from the nearest coastal town. Over-fishing dramatically changes the reef ecosystem, as it decimates groups of fish that fulfill important functions on the reef. One example is parrotfish, which keep the algae on a reef in check—remove these grazers of the sea, and algae will soon take over the reef. The more remote reefs also suffer from blast fishing and cyanide fishing, which are both illegal in Indonesia. A conservation agreement, where villagers agree to protect a reef from fishing, is one way to address the problem of over-fishing. 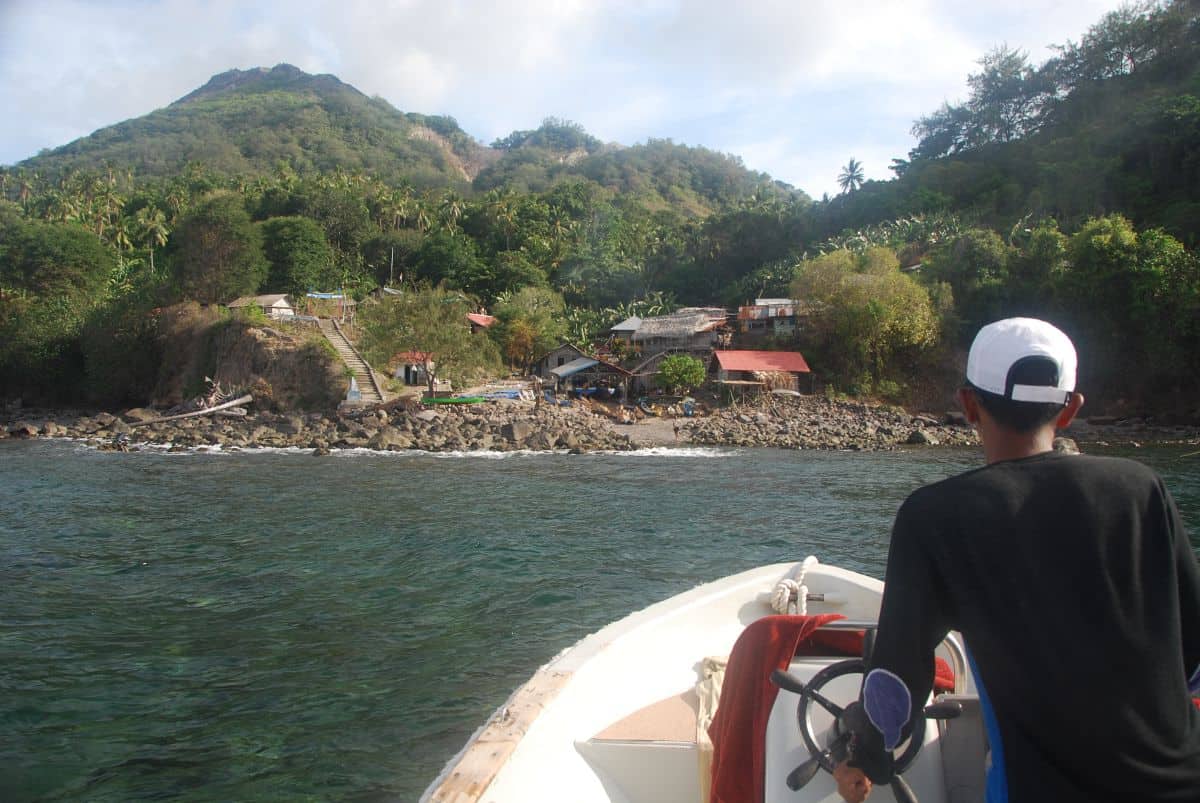 The organization I work for has a long history of making conservation agreements for forests and other land habitats, but there are only few examples of conservation agreements for reefs. The problem here in Indonesia, as in many other countries, is that reefs are part of the sea and as such they cannot be owned by a single person, company, or association. As a result, only government can take responsibility for conservation of reefs. Nevertheless, especially the more remote villages in eastern Indonesia do take informal ownership of the reefs, and visitors, whether they be liveaboards or fishers, do pay a fee to the village. Indonesian law accommodates this practice by acknowledging that fishery management must take into account kearifan lokal, or local wisdom. This mechanism presents the conservationist with the opportunity to ask the community to set aside part of their reefs for conservation.

One might wonder why a village would agree to set aside part of “their” reefs for conservation. In my experience, most villagers do appreciate the need for conservation, but this does not mean they are willing to sacrifice part of their livelihood for generations-to-come. After all, life is expensive: Children must go to school, hospital bills do need to be paid, and a new roof does cost money. It’s tough to ask villagers to forego part of their income, even if the villagers seem sympathetic to the idea. The negotiation becomes a lot more straightforward if the conservationist offers a real incentive (cash is best), in return for which the villagers agree to become stewards of their reefs. 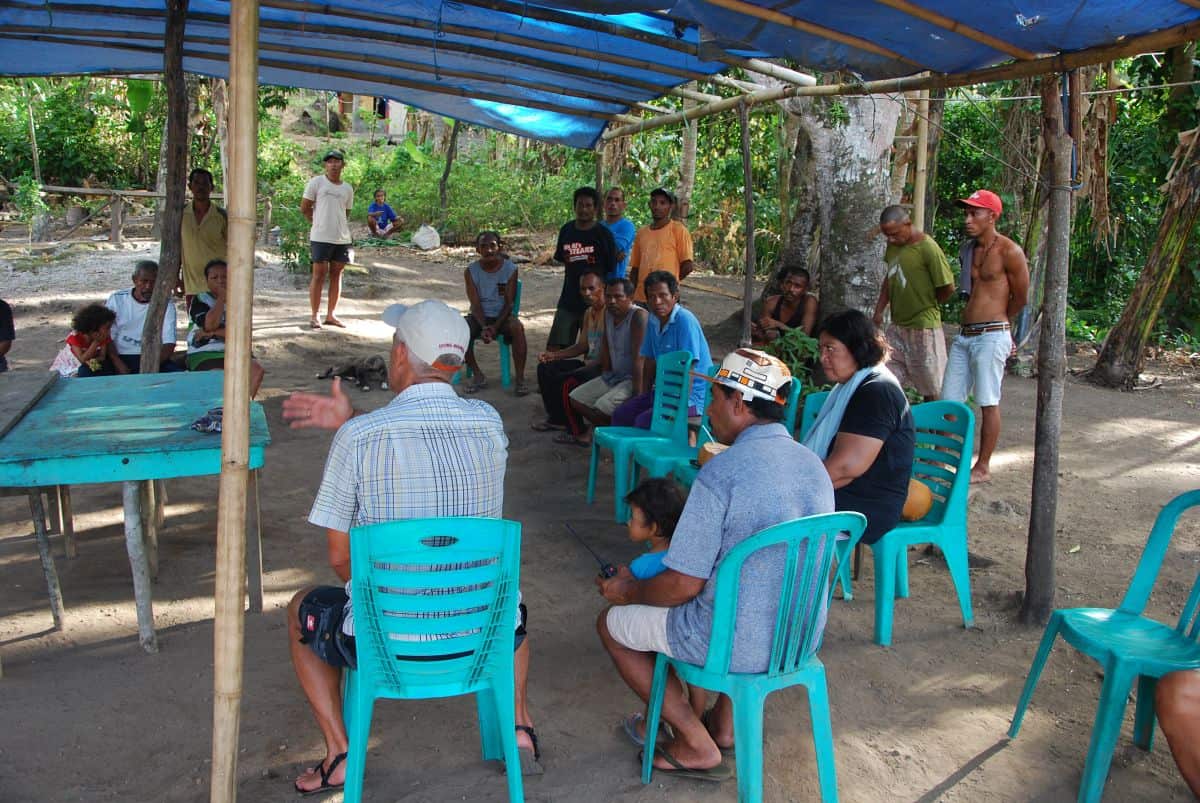 Negotiating a reef conservation agreement in front of the house of the Kepala Dusun of Jerili village, Serua Island

The basic criteria for selection of a reef for a conservation agreement are (1) biodiverse, and in good condition, (2) large enough to sustain a reef fish population, amounting to a minimum of about 1,000 ha for a patch reef or an atoll reef, or 5 km in distance along a fringing reef, (3) a clear delineation, e.g. a reef around a small island, a distinct atoll or patch reef, or a fringing reef between two capes, (4) clear traditional ownership that is widely acknowledged by other villages in the area. It helps if the reef has a feature that sets it apart from other reefs, and it also helps if the reef is an attractive dive site. Examples of such features are a particularly high density of fish, frequent sightings of sharks or manta rays, and, for macro-photographers, pygme seahorses and ornate ghostpipefish.

So the mission of me and my colleagues for the three conservation trips in November 2020, April 2021, and November 2021 was the establishment and evaluation of a conservation agreement in one of the villages along the route of Seven Seas. We ended up working with Serua in the district of Maluku Tengah (“Central Maluku”). 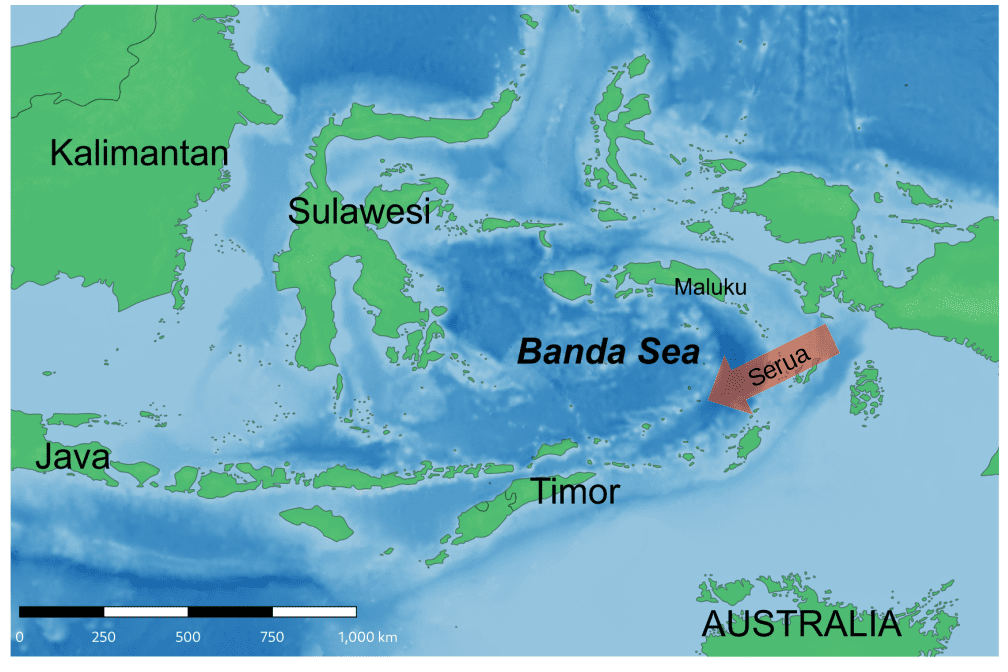 East Indonesia, with the location of Serua Island in the Banda Sea.

Serua is a volcanic island in the inner Banda Arch, and it is part of an archipelago that stretches 120 nautical miles from its southwestern island Teun to its northeastern tip formed by the uninhabited Manuk Island (that is, uninhabited by humans—it is a major breeding colony for red-footed boobies, brown boobies, fregates, and red-tailed tropic birds). Serua and the islets Kekeh Besear and Kekeh Kecil feature excellent coral reefs, with the abundant fish life one learns to expect from reefs in the Ring of Fire (noting that even the usual suspects on these reefs can keep the diving naturalist interested for decades!). There is, however, one outstanding natural phenomenon that makes Serua special: It features schooling hammerhead sharks Sphyrna lewini, just off Kekeh Besar.

Serua Island has four villages, of which Jerili is the largest one. Jerili is the village closest to both Kekeh islets, and therefore its inhabitants claim use rights over the reefs Kekeh Besar (“Big Kekeh”) and Kekeh Kecil (“Small Kekeh”). It is also the village where live-aboards report to ask permission for diving and to pay an unofficial visitor’s fee (usually Rp 150,000 per diver, or about US$ 10). It is usually the head of the neighborhood (Kepala Dusun) who takes care of the administration and the fees. We found that there are 30 fishers who work the reefs around the Kekeh islets—partly for their own consumption, and partly to process as dried and salted fish, for sale in Ambon or to buyers who pass by onboard Indonesia’s inter-island ferry service, Sabuk Nusantara.

One of the beaches of Serua Island, with fishing canoes.

The fishers of Jerili mentioned that fishers from elsewhere, especially Sulawesi, sometimes pass by to fish the reefs around Kekeh with home-made bombs. Blast fishing is illegal in Indonesia, and it is less common now than it used to be in the nineties, but it still happens on remote reefs where the risk of getting arrested is low. Most visiting fishers, however, use legal fishing methods (such as hook-and-line), and just like the live-aboards they usually ask for permission to work the reefs near the villages. For example, in nearby Teun Island, we learned that visiting fishers pay at least Rp 500,000 (US$ 35) for the unofficial right to fish for a couple of days.

We found out that fishing for the people of Jerili provides income that is additional to farming, which means that they do not exclusively depend on fishing. Furthermore, a tentative inspection of the catch revealed they were getting scads for bait, some rainbow runners, and some trevallies in addition to a variety of reef fish. This means that they do at least part of their fishing a couple of hundred meter away from the reef, in open water. Finally, we learned that Jerili practices sasi laut, a traditional harvesting practice for sea cucumber and lobster, which takes place a couple of weeks every year or every second year.

Having learned how the people of Jerili make a living, we got the group of fishers together in front of the house of the Kepala Dusun. After some back-and-forth we made a deal with the fishers that protects the reefs around the Kekeh islets from fishing for a period of six months. In total, the reefs in the conservation area stretched along a distance of six kilometers around the islands, including the waters up to 200 m from the reef slope. As part of the deal, the fishers promised to prevent others from fishing the reef, and to conduct regular patrols of the area with one of their boats. We agreed that diving in the conservation area would still be allowed. We offered a cash payment, to be distributed among the 30 fishers. We also provided some basic supplies, namely binoculars, a VHF radio, a camera, and a tracking device. The fishers used the tracking device and the camera to report on their patrols, and they also used the camera to share pictures on their catch. We recruited one of the villagers, Pak Yakub, as a steward to help with management of this community-driven conservation program.

This agreement is just the beginning of a more comprehensive program, of course, and a no-fishing pause of six months won’t suffice for reef fish of Kekeh to recover after decades of hook-and-line fishing. Moreover, we do not know for sure whether any poaching took place. We did find recently-lost fishing nylon on the reefs when we visited the conservation area only nine days after the agreement expired, on November 12, 2021…

We learned that making a straightforward deal for conservation is possible, and that it is quite affordable. We can further streamline our “offer” to reduce the effort we had to spend on negotiation and ironing out the administrative details of the agreement. We also learned that today’s technology allows us to check whether patrols are active. Furthermore, the images taken by the fishers provide a new window on their fishing practices and their daily lives. Measuring compliance with the agreement remains a challenge, but we have found a solution for that as well: Hook-and-line fishing on reefs almost always results in occasional loss of gear, so we can use presence of fishing line on the reef as an indicator for fishing. We are planning to clean the reefs of fishing line at the start of the agreement, and to do occasional inspections of the reef once or twice a year to check whether there is any lost fishing gear.

It’s nice to finish this blog on an upbeat note, and we do have a tangible success to highlight here. Right at the beginning of the conservation agreement, the Jerili community detected blast fishing in the conservation area, on the northern side of Kekeh Besar. Approaching blast fishers is a bit tricky for an unarmed community patrol, since blast fishers can use their fish bombs as hand grenades. Fortunately, Pak Yakub and the Kepala Dusun, Pak Edo, have good connections with the Indonesian Navy, and they were able to radio in a patrol vessel that happened to be in Saumlaki port, about three hours from Serua. The Navy managed to arrest to blast fishers at sea. Such occasional arrests are very effective in discouraging blast fishing. This illustrates how communities and enforcement agencies can work together to protect reefs, provided that there are tangible incentives for communities to participate in a conservation program.