The Story About Snappers

I have always liked snappers, perhaps because they are so recognizable as a bona fide, standard-issue fish. Ask a 5-year old to draw a fish, and she will put something on paper that follows the basic outline of a snapper, swimming around in the lower half of the water column. One might forgive her for adding bubbles coming out of its mouth, but for the rest it would be pretty accurate. If you would project a bohar snapper Lutjanus bohar on that drawing, it would fit the outline better than say a tuna or a flounder, let alone a lionfish or a mudskipper.

The bohar snapper is perhaps the most abundant mid-sized snapper on the reefs of Indonesia. Any diver visiting a reasonable intact reef in Indonesia has come across a couple of bohars. Their usual coloration is a brownish red, but in the spawning season some of them, presumably the males, get pale silvery flanks and a dark back. You will find small ones (10 cm from snout to tail) as well as big ones on the reef, which suggests that they spend most of their lives on the reef. They keep their distance from divers without being shy, and the bigger ones like to swim a couple of meters away from the reef. They sometimes mix with other snappers—the smaller ones sometimes team up with humpback snapper Lutjanus gibbus, and the larger ones once in a while chill with midnight snappers Macolor macularis or go for a work-out with bigeye trevallies. They have a stocky build, and they are powerful swimmers. 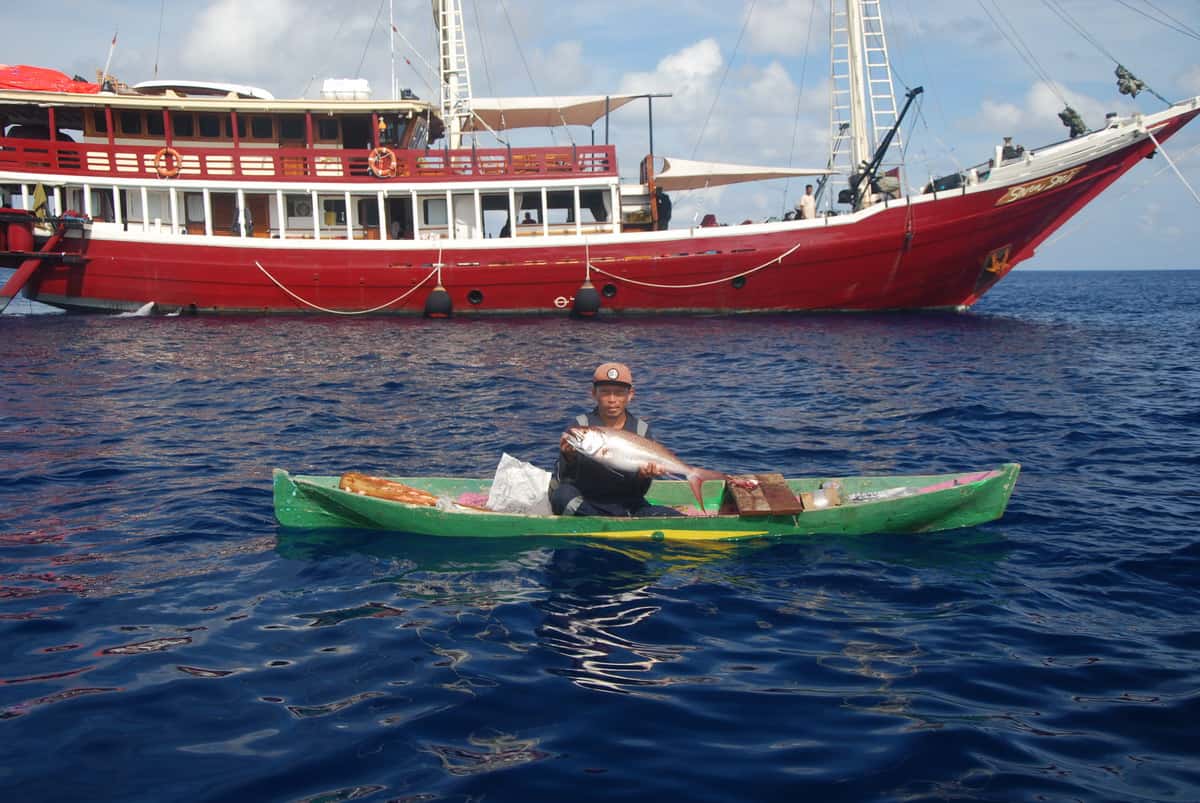 Fisher in front of The Seven Seas

In the southern channel into the lagoon of Meaterialam Atoll we found a huge spawning aggregation of these snappers—hundreds of bohars at about 15 m depth, many of them in spawning colors, and not nearly as cautious with us divers as they normally are. I just love being in a big school, as the fish stream by, sometimes enclosing me, with some of the braver ones checking me out. It seems that each fish species has its own way to check out SCUBA divers. Bohars just stream by, but you still feel being noticed; schools of humpback snappers and sailfin snappers don’t seem to notice anything and they just go about their business as if the diver wasn’t there. A school of barracudas can seem a bit threatening as they swim towards a diver and start circling her, whereas bigeye trevallies like to stay close together and it looks as if a diver punches a hole in a wall of glittering fish as she gets up and close. At Meaterialam Atoll, the bohars were the stars of the show, but they were not the only protagonists. There were large schools of Lutjanus russelli, longnose emperors, and bigeye trevallies, a small group of very big, male Napoleon wrasse, accompanied by the much smaller females, some oceanic coral trout Plectropomus laevis, and even a young giant grouper Epinephelus lanceolatus.

Both snappers and groupers aggregate to spawn, but they do so in different ways. The males one of the most common aggregating groupers of Indonesia, the squaretail coraltrout Plectropomus areolatus stake out a small territory of a couple of square meters on the reef, usually a flat, sandy bit in between corals, waiting for females to get close. So a spawning aggregation of these groupers looks a bit like a tapestry of suburban gardens, with each male jealously guarding his patch. The males don’t mind presence of other fish species, but they do fight with their conspecific neighbors. Snappers, on the other hand, form large schools, where all fish seem to have a similar idea of where to go and what to do. I have never seen them fight among themselves, and they don’t show bite marks like the groupers do.

I do not normally rate fish in terms of their eating qualities, but with its pretty reddish coloration the bohar snapper look as if they were designed for a barbeque or as a sweet-and-sour dish with green onions and ginger. First impressions can be deceiving, however, as these fish are almost inedible! The meat of the bigger ones is very tough, and in Australia and the countries east of Indonesia these fish are known to be ciguatoxic. Ciguatoxin is produced by certain algae that live on some (but not all) reefs, and this toxin bio-accumulates. That means that this toxin is found in increasing concentrations as energy moves up the food chain through predation. The top predators, which include the bohar snappers, end up with a high concentration of the toxin. This does not bother the fish itself (well, perhaps it does, but it’s difficult to find out), but having a cigatoxic fish for dinner causes nausea, diarrhea, and vomiting. Ciguatera poisoning is rare in Indonesia, so the bohar snappers may be safe to eat, but let’s just conclude that even a low risk of ciguatera is still a good reason to leave these snappers in their element.

For commercial fisheries, the quintessential red snapper of Indonesia is the Malabar snapper Lutjanus malabaricus. I have never seen them on a reef, instead they favor seas with a flat, sandy bottom up to a depth of about 100 m. In Indonesia, the main fishing grounds for this species are the Java Sea, the Arafura Sea, and the seas around the Natuna islands in west Indonesia, where they are caught with droplines, longlines, and traps. Sometimes caught together with Malabar snapper is the goldband snapper Pristopomoides multidens, so called because of the faint golden bands on its head and back. There are various snappers of the genus Pristipomoides, and they all have a similar shape: A blunt nose, a body shaped like a torpedo, and a single dorsal fin that runs along much of the back of the fish, and a v-shaped tail fin. These fish are built for speed! Goldbands tend to prefer deeper habitats than the Malabars do. 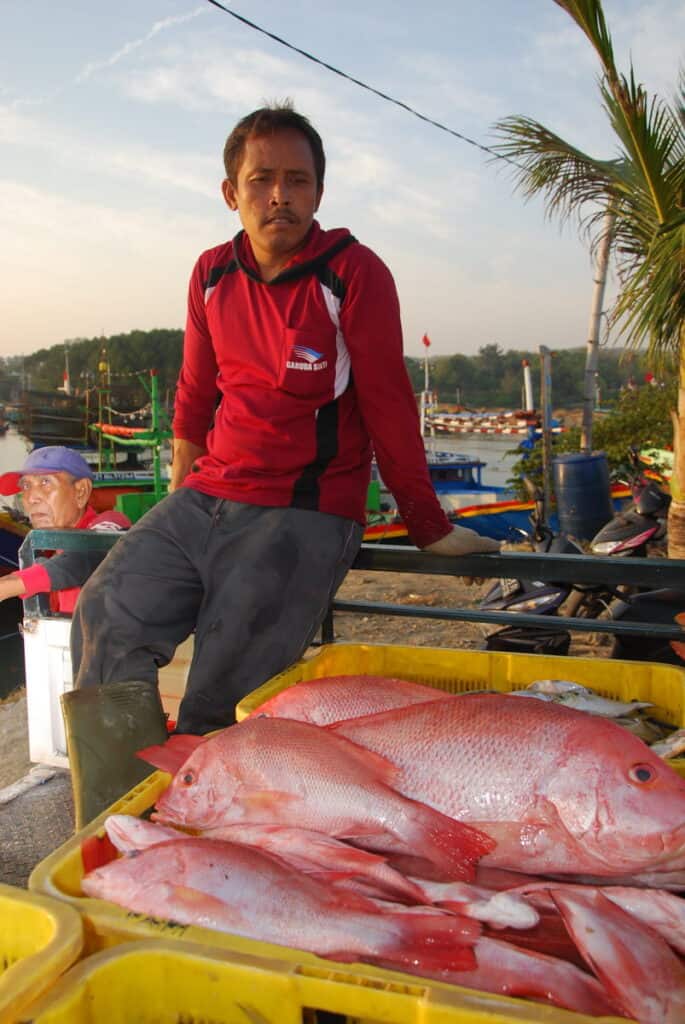 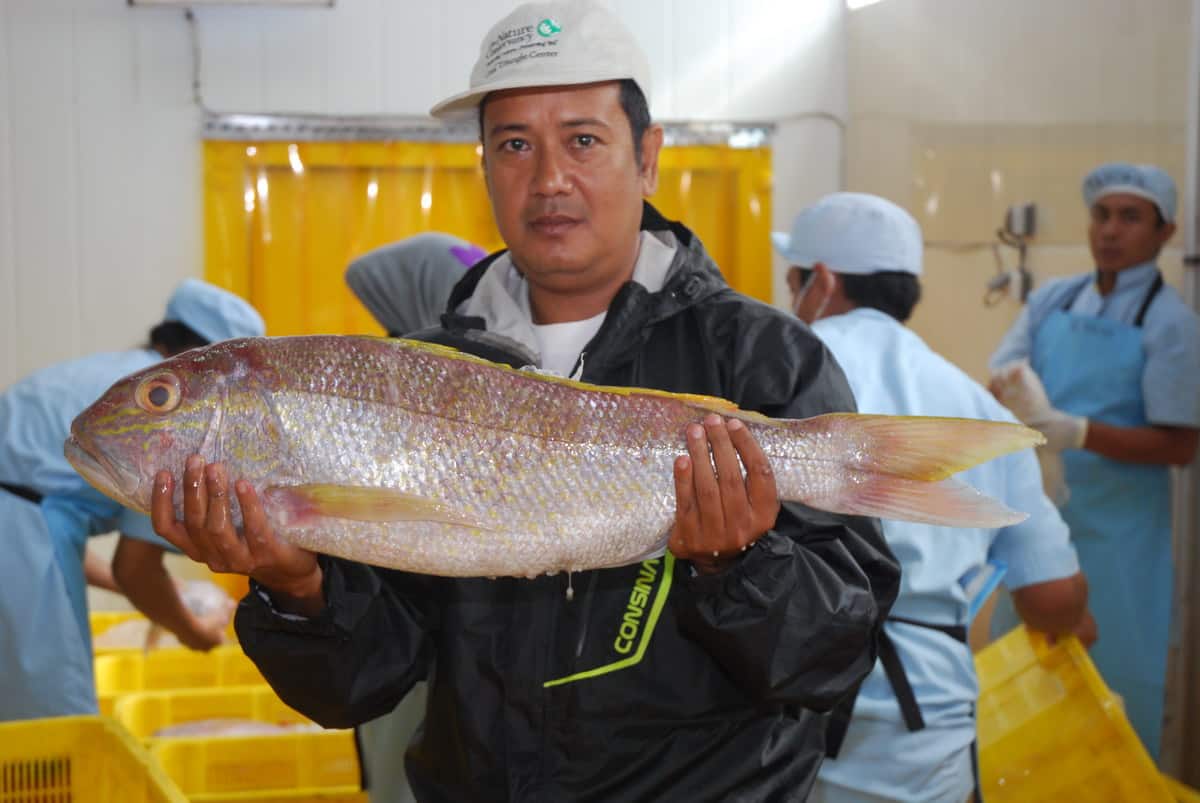 Going down the continental shelf to depths beyond 200m, it gets too difficult to deploy longlines or traps, so fishers use droplines to fish at these greater depths. Droplines are lines with a weight at the end and about seven hooks attached to the main line with side lines or snoods. Each line is operated by a fisher, by hand or by a hand-cranked reel. We are now entering the realm of the “true” deepwater snappers! My favorite deepwater snapper is the flame snapper, Etelis coruscans. Bright red, with a forked tail that has a very long upper lobe—one can only guess at the evolutionary advantage of that tail fin, but it’s very pretty. 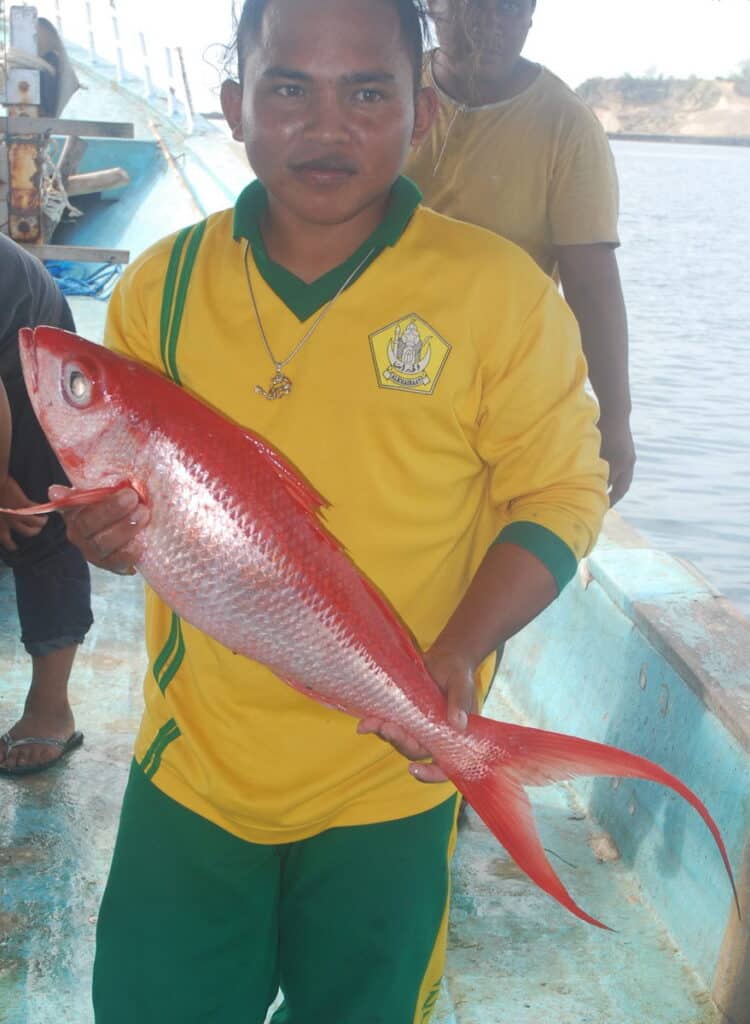 The “true” deepwater snappers live on the slopes of the continental shelf, and also on the slopes of the many volcanic islands along the inner Banda Arch. During our Epic trip onboard Seven Seas we ran into snapper fishers at Manuk Island—these fishers hailed from the Banda Islands, traveling 100 nautical miles in a small open boat to fish the deep slopes of this volcanic island. We were surprised that these fishers traveled that far, since Banda itself should also have the same fish. The fishers, however, said that fishing at Manuk was better, and since they needed a good amount for a wedding party back home they invested the fuel and time for a round trip to Manuk. 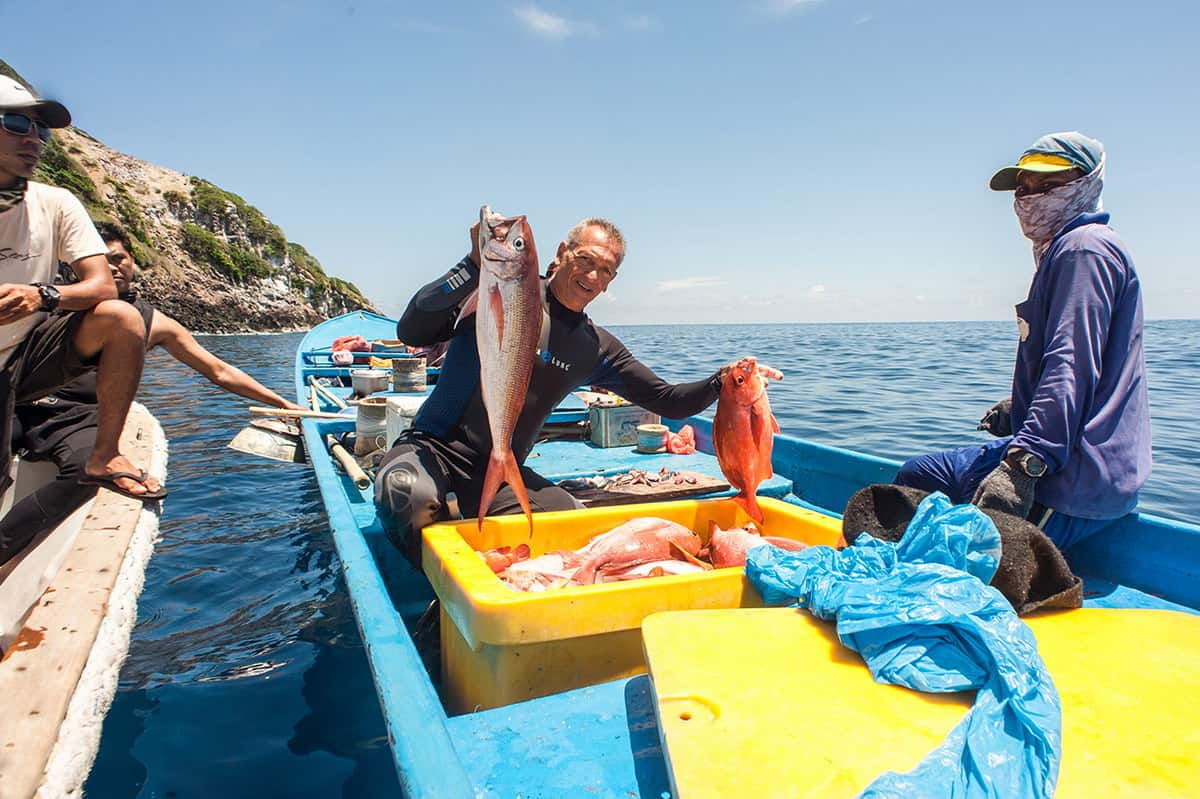 The trip of the Banda fishers illustrates a common phenomenon in fisheries: Once local fishing grounds get depleted, fishers have to travel further to fill up the hold. The Banda islands themselves still offer fishing opportunities, it just would have taken these fishers too long to get the volume that they needed for the wedding party. Especially the “true” deepwater snappers get over-exploited easily. They tend to hang out in schools around an underwater mountain, cliff, or a wreck, and once the fishers locate such a place it’s easy to catch them. In eastern Indonesia, some of the villages take ownership of the best sea mountains, jealously guarding access to these excellent fishing grounds.

So what does a “sustainable” snapper fishery actually mean? The fishers we met in Manuk were clearly disappointed with the fishing sites around the Banda Islands, even though Banda Islands would still be considered “almost pristine” by scientists and diving naturalists. Despite recent coral bleaching events, the corals around Banda are still in excellent condition and many of the reef fish species are still at their pristine biomass. On the other hand, it’s clear that the larger sharks have been decimated. Intuitively, one might say that the snappers of the Banda Sea must be somewhere between “pristine” and “decimated”. In fact, the fishery program I work for estimated that the Malabar snappers are at 13%, the goldband snappers at 16%, and flame snappers are (sadly) at 7% of their pristine biomass. Is that “sustainable”?

As a fisheries biologist I must adhere to the convention that a stock exploited down to half its pristine biomass can be considered a healthy, sustainably fished stock. If Indonesia’s fisheries managers and fishing communities succeed in keeping the stock at that level, one can even apply for certification to the sustainability standards of Marine Stewardship Council. As a marine naturalist, however, I still feel that taking half is, well, pretty greedy. After all, humankind is not the only hazard that these fish need to contend with. There is also predation by anything that is somewhat bigger than these snappers: Sharks, tuna, marlins, sharks, dolphins and toothed whales, and so on. I do not put all the blame on fishers or even fishing companies. The main problem is the indifference of the market (that’s all of us) about the origin and sustainability of our food. This is changing, but a lot of work still needs to be done to save the snappers.

I worry about those deepwater snappers. It was difficult enough to develop an appreciation for underwater life among the general public, but we got there thanks to SCUBA diving, and documentaries about the world’s tropical reefs. These days, just about anybody has the opportunity to learn about coral reefs, if only through the underwater footage shot by professional and amateur divers available on the internet. The true deepwater snappers, however, live at depths greater than 150 meters, and so far the only way to appreciate them has been by yanking them out of their habitat to the surface, for fun or for food. Flapping on the deck of the fishing vessel, out of its element, the flame snapper, Etelis coruscans, displays its magnificent red color. What most of us perceive as pretty was never intended to be enjoyed as such, since the color red is the first to disappear from the spectrum as light penetrates the water column. I guess that evolving as a red fish was just the easiest way to achieve a deep black in its natural habitat.

There is nothing for it—we must learn to appreciate these magnificent snappers without seeing them. Consider it a long-distance relationship with nature, and it’s a relationship that deserves attention. If we loose the deepwater snappers, because of need, greed, or carelessness, we’ll find ourselves impoverished in more ways than we can anticipate.