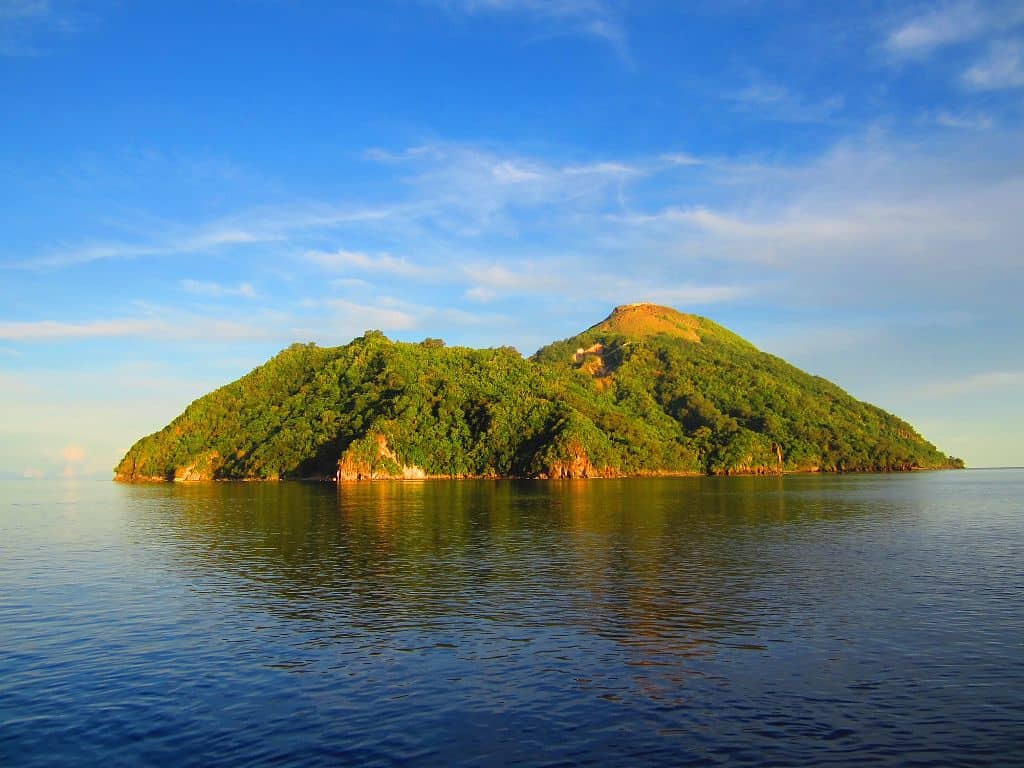 Pulau Nusa Bun…Dawera…Nila…Nil Desperandum….Teva….You can roll these island names around your mouth like luscious lollies. Never heard of them? Neither had I until I joined The Seven Seas liveaboard for the dive trip of a lifetime.

They are Indonesian islands that sweep from Timor towards New Guinea. Many are uninhabited. Some are active volcanoes, swathed in plumed clouds. All are breathtakingly beautiful.

Once the area was a rich trading centre, busy with local traffic. Then in the 16th Century the VOC – the infamous Dutch East India Company – moved in, crushing local trade. The richness of Holland was made with the precious pepper, cloves and nutmeg and that grow in profusion in this rich volcanic soil.

With the eventual retreat of the VOC, these islands were forgotten. And that is the evocative name they bear today: The Forgotten Islands.

Being forgotten has is benefits. Here man’s footprint is light. In the 15 days we were at sea and the 700 nautical miles we covered, only two other dive boats were seen. Few fishing boats marred the horizon, and the villagers still fish in their traditional dugout canoes.

Less human pressure means more sea life —– and my head is still reeling from the profusion, colour, size and form of the corals and fish. It has to be the best diving in the world!

On most of the islands we dived on, sheer walls of corals plunge into the deeps. Giant fans…oversize soft corals ….bizarre forms in psychedelic shades that a Disney designer couldn’t imagine. A surrealist’s dream…

As Australian diver Dougall quipped : “I can’t see the corals for all the bloody fish.” 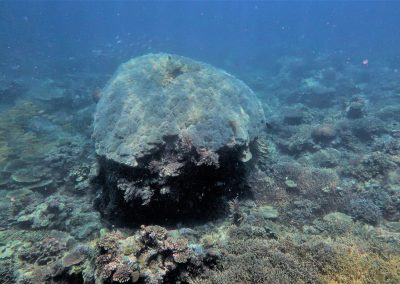 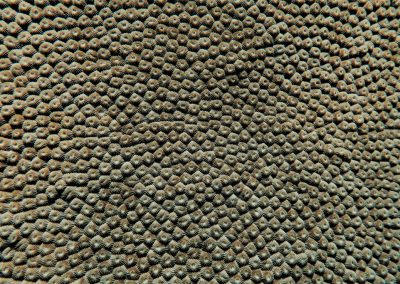 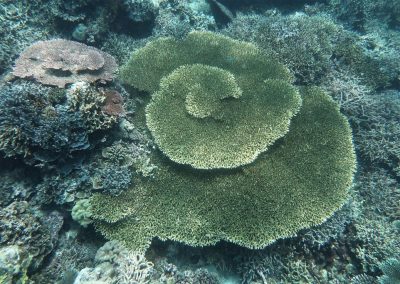 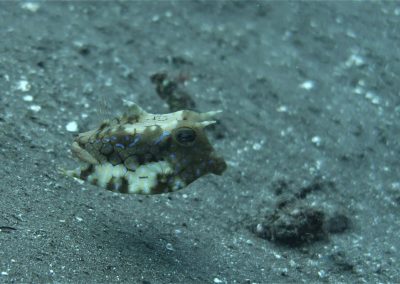 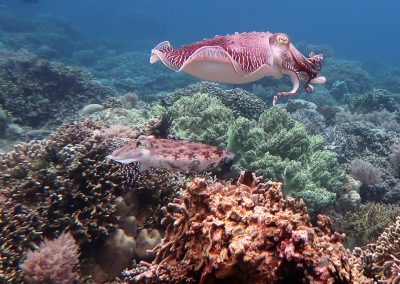 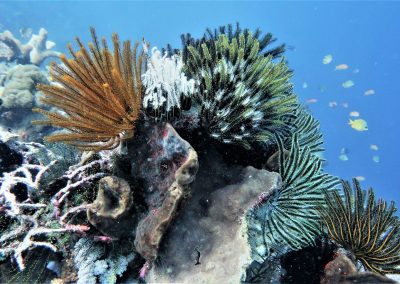 Giant schools of barracuda sweep through on every dive, a silver swathe intent on their own graceful hunt. Brilliant fusiliers flash in the sun, and dogtooth tunas and giant trevallies, strangely unhurried, swim in an out of view.

Bumphead parrotfish the size of doors are our everyday companions. Unafraid, they swim around us, often in groups of five or more.

Sharks? Oh yes. The first we saw was a fleeting, fleeing shadow. But the next, a silvertip, was on parade, turning on its path to get a better look at the divers. And us, it.

But it was on the island of Serua that we met my favourite shark, the hammerhead. On the first dive we dropped, literally, onto a large hammerhead. Tawny shades of silver and beige, it’s weird head beautifully balanced by the sweeping tail, it made several lazy passes before swimming into the deep clear water.

Word passed from another diving boat that the hammerheads were schooling early in the morning.

Determined not the miss the opportunity, we were up before dawn. A golden sun was just breaking as we entered the water. And we were rewarded. There they were, 30, perhaps more, in tight formation, eerily pale in the early light. Imperial. Impervious to our presence.

This was just a prelude to some of the best shark action I’ve ever seen. A few days later, battling a strong current at 8 metres, I dropped down deeper to escape the rushing water. My eye caught something, and I dropped further to a ledge at 18 metres. A torpedo shape darted out of the shadows, diving down underneath the ledge. Then another. Then another. Four – Ed Warner claimed five – good sized reef sharks, each perhaps 3 metres – were in hunting mode. They were diving in on something we couldn’t see, oblivious to the bubble blowing audience. This strangely beautifully ballet went on for perhaps 15 minutes, but with air becoming short, we had to tear ourselves away. 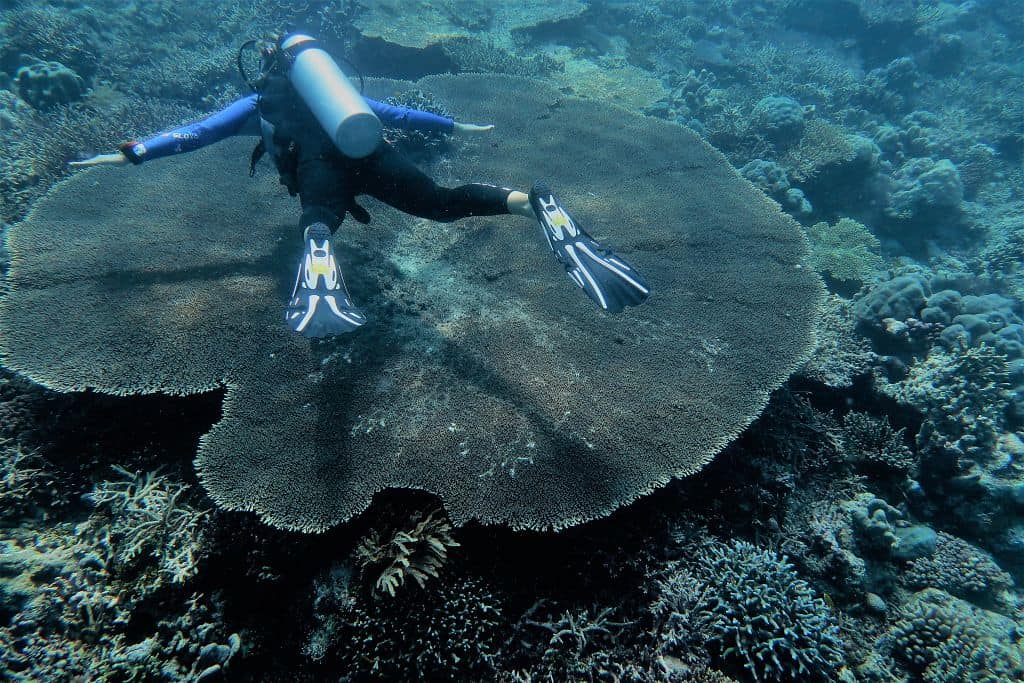 In the shallower water, giant Titan triggerfishes guarded nests and eggs, frazzled parents fraught with worries and ready to attack. Over by the pale rocks, a huge octopus was copulating…. A giant tentacle carrying sperm stretched out to where the female was hiding, depositing the sperm in her mantle cavity. It didn’t look much fun – especially as the males die within a few months of mating!

Despite not seeing many large fishing boats, there was evidence they were there. Lost nylon lines tangled through corals, and the only manta ray we saw, sadly, had line wrapped around its head and streaming out behind like a long tail. Rod, in a heroic effort, dived down past 35 metres hoping to pull the line free it –sadly, impossible.

A turtle, its flipper caught in a bamboo frame, was luckier. It was caught and freed.

With 3 dives a day – four when there were night dives – and 1300 kilometres of ocean to cover, the crew of the Seven Seas had a tight schedule to keep. And it ran like clockwork.|

Yet we all know that behind such smooth meshing lies meticulous organization, and, for finding the dive sites, personal, persistant research.

Picking the right crew is an art the Seven Seas has mastered.
What a pleasure to stagger upstairs the morning (often at 6.30) to be met by Fitri’s warm smile.

To know that always-smiling Jeffrey and eagle-eyed Irwan, the dive-masters, were watching over us. Our gear would be where we expected it. Our bottles well filled. That our own forgetfulness would be met with a grin.

Divers are a hungry lot. But we didn’t just eat. We feasted. The two chefs have a fabulous repertoire of both Asian and Western food, and we were spoilt at every meal.

Ringmaster Karl – cruise director on the official list – has a light touch, a good sense of humour and the professionalism that kept everything running smoothly. Not an easy task with 16 Alpha divers on board!

We went line fishing and dined on Spanish mackerel that night. On the last day, after a valiant fight, a giant trevally threw the hook, and it quickly morphed into a scene out of Tarzan as Big John threw himself into the water to wrestle the 40 kilo fish aboard.

We visited a small village and were greeted by song, dance and a feast; we quenched our thirst on freshly cut green coconuts and sipped sopi, the local coconut-based alcohol that punched our eyes out.

Forgotten Islands, they call them. 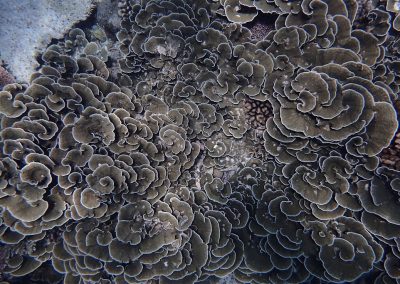 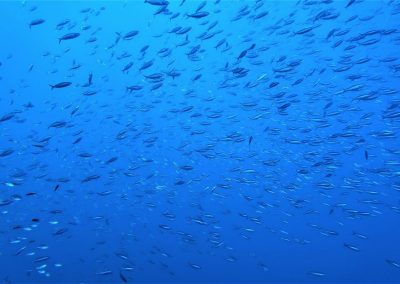 Fusiliers far and near 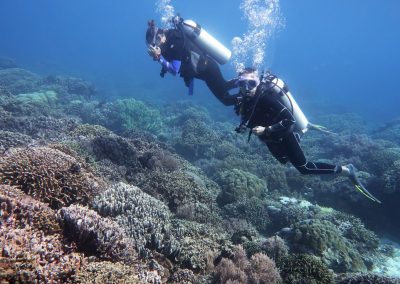 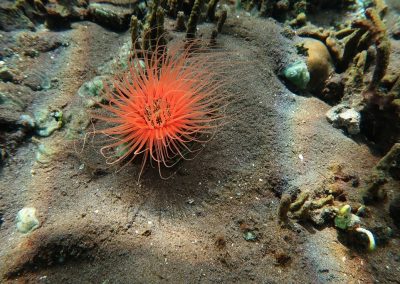 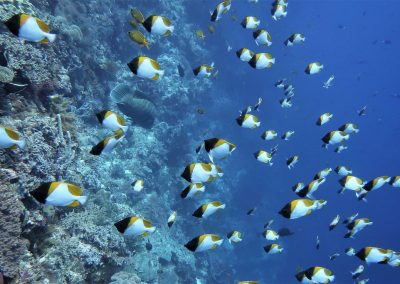 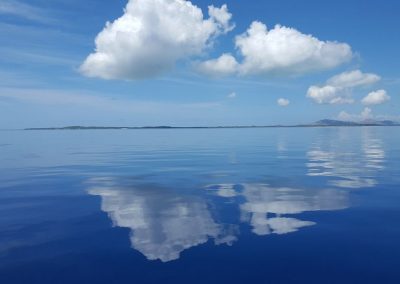 Tranquility above, by Byron Bishop 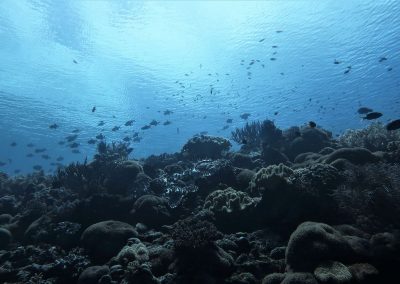 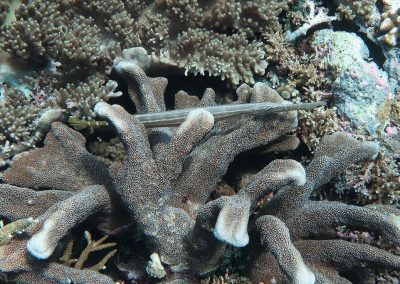 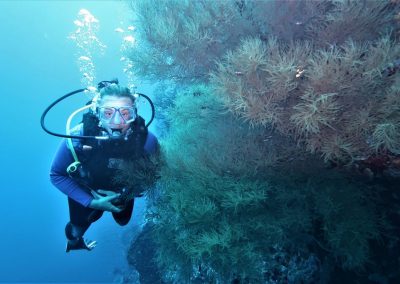 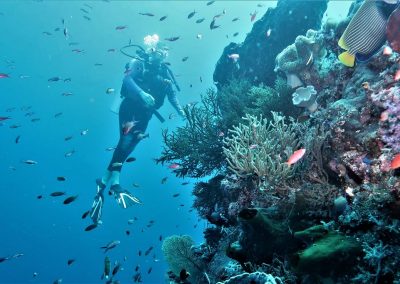 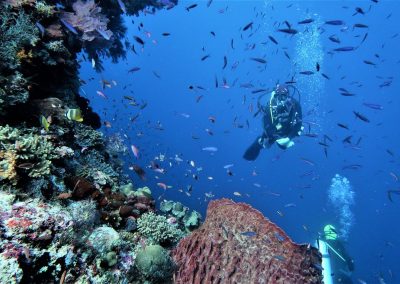